Missionary to the Poor 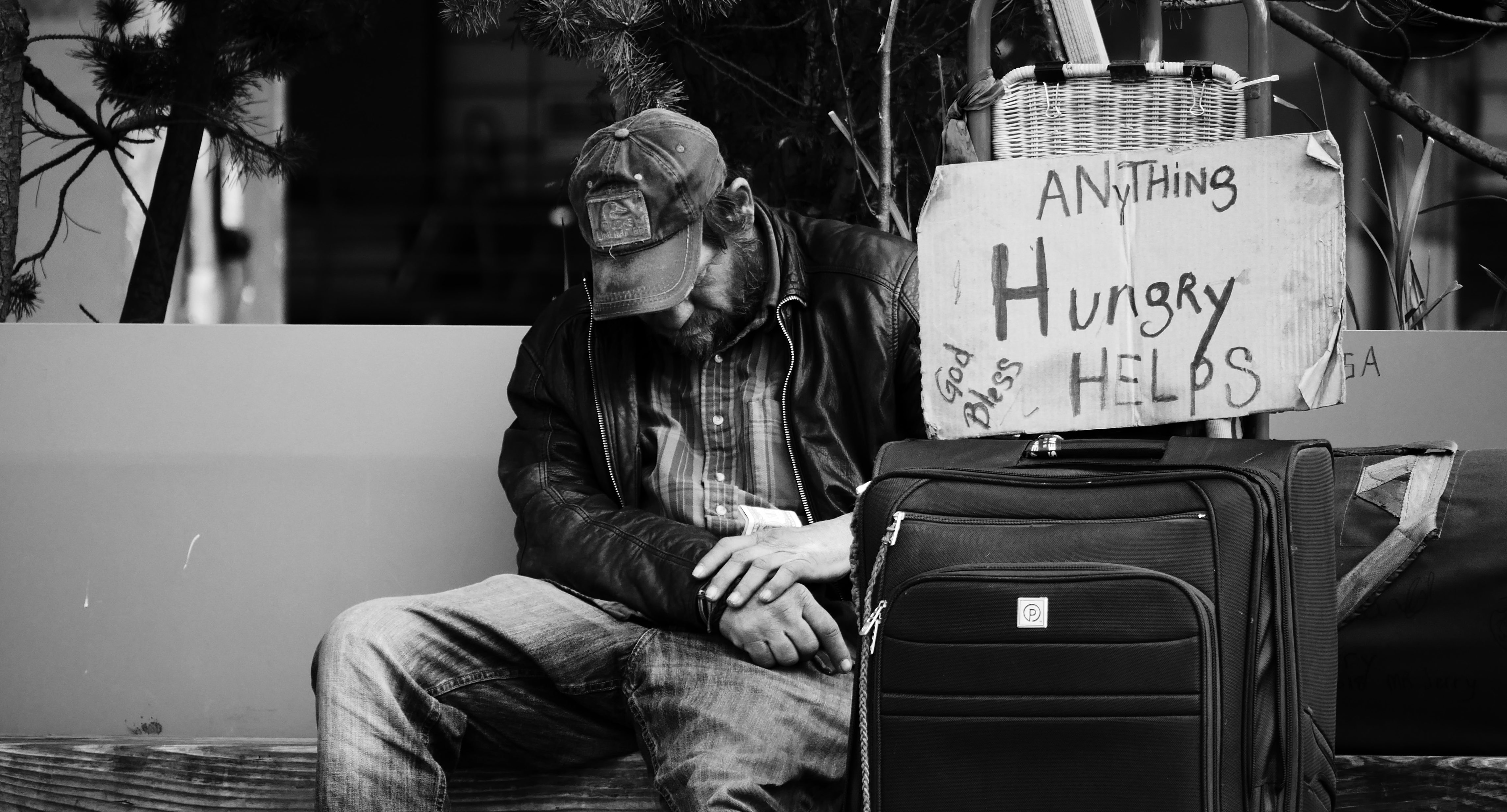 omehow, I am able to see Christ in the roughest of criminals, the nastiest of the homeless, and the craziest of the mentally ill. I understand that every person is created in the image of God.

In 1992, God called us to serve the poor of Norfolk, Virginia. My beautiful wife and 3-year-old boy moved with me from a nice life in the suburbs into the inner city. The Church of God provided an opportunity through a pilot program, and thus we started the Mission American Urban Outreach Center. Beginning from the trunk of our car, we fed the poor on the street corner and played games with children in the projects, networking and referring the poor to available services. We provided food, clothing, coats, blankets, socks, and hygiene packets, and preached from a milk crate.

The original idea was to win these people to Christ and transition them into local churches to become tithe-paying members—giving the denomination and donors a return on their investment. Well, they would “get saved,” but we could not assimilate them. A church van would pick them up, the church would feed them breakfast, and they would sit together in the sanctuary. Everyone was very friendly—too friendly—going out of their way to greet and welcome them every Sunday.

Imagine having to carefully plan your baptismal service to ensure that HIV patients are baptized last. Then after that careful planning, still losing your largest tithe payer because their son accepted Christ and his family was too afraid for him to be baptized. Or church members not wanting to share a pew with an unbathed homeless person. Outreach to the poor and mentally ill was fine, but worshiping and fellowshipping with them was too much for many people. So we started a church for the poor, Sanctuary of Hope, in Portsmouth.

I remember one man who lost his job, then his wife and daughter; he found himself addicted and homeless. In and out of jail for petty larceny, vagrancy, using illegal substances, and public intoxication, he aggravated us and stole from us. Yet he attended church every week. His repentance would only last for a few days at a time.

After we spent 10 years wrestling with him, he died, not even 50 years old. While preparing for his funeral, I knew that his wife, daughter, and brother would be there. Over the years, I had called them time and time again, asking them to give him one more chance. How could I, as a minister of the gospel—a gospel that did not work for this man or his family—face them? What could I say?

I brought the man a suit from the clothing closet, coordinated the funeral, and begged for the services of the funeral home, including a free casket so his daughter’s last memory of her daddy was of him clean and neatly dressed . . . though I knew it would end with a cheap cremation and his ashes being discarded.

While preparing for his funeral, I decided to end my ministry among the poor. This dead drug addict proved my ineffectiveness and failure as an inner-city missionary. He was one of hundreds of men, women, and families whose lives had not changed.

As I walked into the funeral service, a drug-addicted prostitute came to me crying. Between her sobs, she said she was with this man when he died, and his last words were,

“Lord Jesus, please have mercy on me. I believe You are the Son of God and that You love me. I have failed as a man, a husband, and a father, and I need You to save me!”

At that moment, I believe the Lord revealed to me that because of the disappointments and traumas of life, this man was not able to accept the grace from God to change his life and live for Christ, but because of our faithfulness, he was able to die right with God. This gave me a peace and confidence about my work among the poor.

There was another drunkard with a long list of problems. He had lost his license and could not legally drive, owing a lot in court costs and fines. Now he works a public job every day, takes care of the church’s lawn, drives the ministry’s box truck, and handles the weekly food distribution. He is not as groomed as most church members in the suburbs, nor does he have all of his teeth. His language can still be colorful and occasionally we will smell alcohol on him, but he is coming to our church, reading his Bible, and praying. He has a long way to go, but he has come much further than most of us. I can now trust him with money and other resources.

Early in my ministry, my first full-time staff member was a young adult with fetal-narcotic syndrome. He was emotionally and intellectually limited, with schizophrenia and bipolar disorder. My family and our ministry took him in. Everyone called him my associate pastor. The work of our inner-city mission was conducted with this young man, nine retirees, and a sailor who gave his time and pickup truck every evening and on weekends until we bought our first box truck. I was able to load a truck and set up a tent in the day and preach at night. Now my body is worn out, and I have to seek God more and develop others to do the work of the ministry.

Even though our current paid staff has been depleted by this economy and we face many challenges, we still continue our programs for the poor. Our missionary staff, along with a host of volunteers from area churches, the military, and business, makes many sacrifices to serve our church and the elderly, mentally ill, homeless, addicted, and otherwise poor. Our church has less than 100 in attendance, and few of the people we reach have a job. When necessary, my salary is the first item to be cut. As the chief executive officer, I could demand a certain salary and my board of directors would pay me well. But knowing that receiving my full salary would cut programs for poor children, it is not a hard decision.

Through our Urban Outreach Center in Portsmouth, we serve meals to some 70 poor children every evening in our after-school program. We tutor them in reading and math, help them with homework, and engage them with computer labs. Our mentors help build their character and teach necessary life skills. They learn about Jesus Christ in our chapel. Their confidence and culture is expanded as they engage in performing arts department and take field trips.

During the summer, we serve breakfast and lunch to about 150 children every day. Mission teams come from across the United States and Canada to help provide chapel services, academic refreshers, field trips, mentoring, performing arts, and sports and recreation for these overlooked children. We not only change the lives of poor children, but of the mission team members as well.

Our soup kitchen serves up to 150 people per meal, and we present the gospel to them.

Our outreach team distributes groceries, clothing, household goods, and school supplies to more than 300 families each month. Also, medical, dental, and social/ psychological services are provided for the poor.

We partner with churches, providing goods to assist them in their ministries to the poor.

My philosophy is, “If I can do what others feel they can’t, shouldn’t I do it?”

In 2000, I led our inner-city church on a mission trip to Jamaica. I thought this might unite the divide in our urban congregation (the “drive-ins” and those that live in the neighborhood). Our theme was, “From the Guttermost to the Uttermost!” We carried a team of 14 members from the Sanctuary of Hope to deep rural Jamaica.

We prayed and fasted for resources, and we were able to purchase 40,000 pounds of rice, 10,000 pounds each of beans, flour, and cornmeal. We provided 4,000 families with a month’s supply of groceries, treated people in our medical clinics, conducted children’s crusades daily and gospel crusades nightly.

Since those early days, I have made 33 mission trips to Jamaica with more than 1,000 short-term missionaries. We have constructed medical clinics, dental clinics, repaired and remodeled orphanages, schools, and nursing homes. We have built 72 homes for poor families. In our clinics, we have treated the sick and provided dental care for thousands.

‘The Least of These’

My heart still breaks and I feel great failure in reaching the “the least of these”—the worst and most hardened of the criminals; those maddened by mental illness; the smelly ones who have been stripped naked by drug addiction and alcohol. These are the ones Christ associated Himself with in Matthew 25, and His mandate rings in our hearts: “Inasmuch as ye have done it unto one of the least of these my brethren, ye have done it unto me” (v. 40).

In the eyes of a hungry, filthy child wearing a soiled diaper, I have seen Mary’s sinless babe, helpless and dependent. In the homeless mentally ill, I see the broken Christ looking at me, crying from despair. When I become weary with an addict, I see our Lord in their eyes and hear Him calling out to me. When the poor line up for help and I want to quit, I hear Him say, “Love thy neighbor as thyself.”

As a missionary to the poor, on behalf of the poor that we serve, I thank our supporters and partners. Their faithful generosity allows us to serve the Lord by serving the least of these.