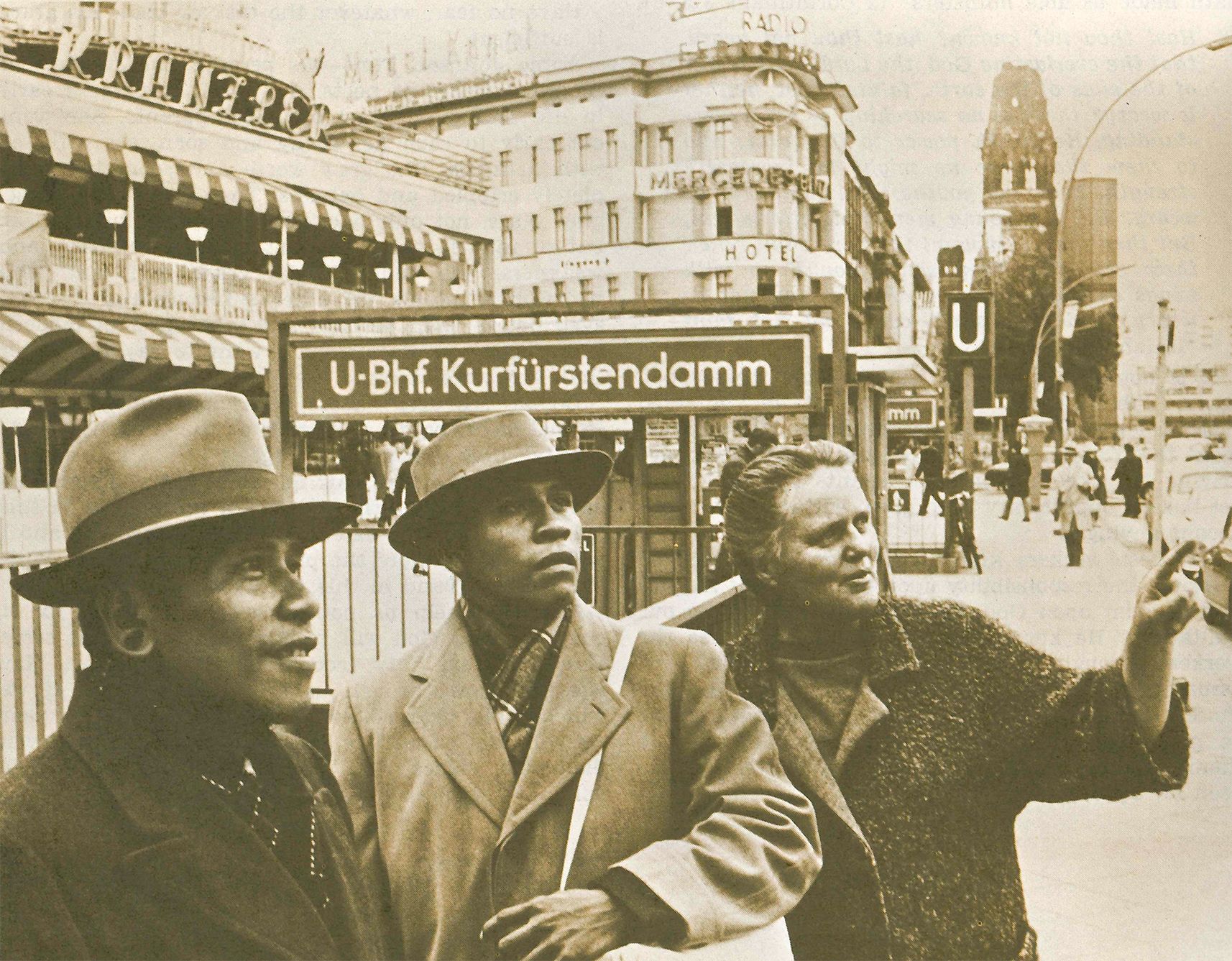 Kimo and Komi with Rachel Saint in Berlin
I

T WAS A SCENE to remind one of heaven. Twelve hundred delegates of “nations, and kindreds, and people, and tongues” (Revelation 7:9), were assembled in West Berlin for the World Congress of Evangelism, held October 26-November 4. But none captured more interest than two delegates from the Auca church in the rain forest of Ecuador.

On a train trip to Switzerland they had been mis­taken for Eskimos by a customs inspector. Congress of Evangelism delegates knew them as transformed members of a killer tribe. Only ten years and ten months before, Kimo and Komi’s father had helped spear to death five American missionaries. Now they stood beside Wycliffe Bible Translator Rachel Saint, the sister of one of the martyred men.

Uncomfortable in suit and topcoat, Kimo, the elder Auca, said through Miss Saint: “Before we heard God’s carving, we didn’t live well. Now we have left our spearings and live happily together. God, who lives high in the heavens, sent us to tell you foreigners to take the gospel to your own people. We will go to our own people who do not yet believe God’s carving. Then together we will meet in heaven.”

Listening in the audience was Marj Saint, widow of martyred Nate Saint, and now Mrs. Van der Puy. Kimo had on June 27, 1965, helped baptize her two older children, Kathy and Steve, in the very same river where Nate and his friends had been killed.

After both Kimo and Kami had given testimonies and missionary challenges to the delegates, Cliff Barrows asked them to sing. As the uninhibited Aucas sang in three note melody and repetitive chants, tears flowed freely and fervent Amens sounded in the congregation. Then as the final hymn of the evening was sung, an African delegate ran forward, leaped upon the platform, and hugged the two Indians.

Everywhere the Aucas went during their week in Berlin, they were the objects of curiosity. Life mag­azine photographers followed them to the zoo where they saw elephants, hippos, camels, zebras, et cetera, for the first time. Before this they had seen only a mouse in the park and a few doves and crows. The reason there were no monkeys, they said, was that the trees were too short and too far apart for them to jump from treetop to treetop.

The weather was cool and overcast in Berlin, and both complained how hard it was to tell the time of day. The only clock they have ever known is the sun.

Kimo and Kami wore their feather headpieces for the Reformation Sunday parade. They lined up be­side Klaus, an American Iroquois Indian, and just behind Billy Graham and the German leaders of the parade.

After a side train trip to Switzerland (they were frightened by the tunnels through the Alps), Kimo, Kami, and Rachel Saint flew to England. and challenged a group of Wycliffe supporters to “take God’s carving to every tribe so they will live happily as we do.”

When they arrived in Chicago (where they were interviewed by the author), they were weary and longing to go home.

The interview took place in a room at the end of a long motel corridor. “You foreigners live in holes,” Kami said disdainfully. “We live in the open air.” He conceded though that “foreigners can see further than the Aucas. We must climb a tree to see a long way,” he said.

The evening before they had spoken at the Moody Memorial Church in Chicago. Kimo’s eyes widened as he described to us-through Rachel Saint-the dif­ference between foreigners’ churches and their own. “You build great big God’s speaking houses. They go up and up (referring to balconies). We have only a small hut and all of us sit on the floor.”

Rachel Saint noted that the Aucas also hold Sun­day services when away on long fishing trips. “When Sunday comes,” she said, “the men halt for rest and take turns telling Bible stories.”

We wondered if they had been frightened by the crowds and the important people they had seen in Europe and the United States. Kimo shrugged and said, “No. Why should we? They are just people like us.” But Kimo noted, “Many foreigners do not obey God’s carving. We could tell they are not happy by look­ing at their faces.”

Had it been a burden to wear the clothes of for­eigners? Kimo sighed and wiggled his shoulders. “They are heavy on my back. At home we wear only a light shirt, short pants, and go barefooted.” When Rachel Saint finished interpreting, she recalled that in the jungle Kimo thought nothing of carrying a wild hog on his back.

We learned that the Aucas’ most frightening ex­perience had not come from riding a jet plane. “This came at Quito,” Miss Saint explained, “before we boarded a big airliner. We were flown there by a Wycliffe pilot and transported by truck to the main terminal. Kimo and Kami were familiar with airplanes but they had never been in an airplane that walks on the trail. Even though our pilot drove, the Aucas sat rigid in the truck. Kimo couldn’t bear to look to the left or right. They did well on the com­mercial planes, except they complained of motor noise on a prop plane.”

Kimo, Miss Saint told us, was the first man believer among the Aucas. “He’s the head man or pastor of the Auca church and can graphically describe the Christian life. One day he said, ‘You see that monkey tied there with a jungle vine? Well that’s the way we are tied to our sin until God sets us free and cuts the jungle vine. Now we’re no longer bound by sin.'”

The missionary translator identified the younger Auca, Kami, as the husband of Dayuma, the first Auca Christian, and subject of the best-selling mis­sionary documentary, The Dayuma Story. “He’s taking back a music box and a bell to his two children,” she said. Miss Saint added that Kimo and Dayuma’s youngest child, Eunice, was born blind. “The old cus­tom called for throwing away a blind child,” she said, “but because of the gospel, the Aucas in our village adore little Euni. Kami is so anxious to see her and his family again.”

What will Kimo and Kami want to do first when they return home? Kami replied quickly to Rachel Saint’s translation. “We are going to the downriver people and speak God’s good words to them,” Kimo said and Kami nodded his agreement.

“The downriver Aucas live as Kimo and Komi’s vil­lagers once did,” Miss Saint explained. “We have not yet had a face-to-face communication with them. Last February a missionary party of four Aucas tried and barely escaped with their lives. The Christian Aucas are willing to continue risking their lives for the sake of taking the gospel to these people. Dyuwi, one of the men who killed the five fellows, is the leader of this missionary thrust. He points to the ex­ample of the five fellows whom he helped kill with the mistaken idea that they were cannibals, and says, ‘They gave their lives for us. If necessary, we will give our lives for our downriver brothers.’ ”

It was time for Rachel Saint and the Aucas to leave for nearby O’Hara Airport. As we prepared to leave, Kimo smiled broadly and began chattering to us. “He’s inviting you to come and visit him,” Rachel Saint said. “He says that you need not be afraid of getting speared.”

We looked at the big Auca Indian and noticed the square holes in his ears which had once contained earplugs. There was also a hole through his nose­now grown over-in which he had once worn a thorn. “That thorn was supposed to get him past the big boa constrictor that guards the way to heaven,” Miss Saint said. “The Aucas say now that only the. holes in Jesus’ hands will get them to heaven.”

We walked down the long motel corridor-called “the foreigners’ hole” by the Aucas-and into the lobby where a plaque announced that the late Presi­dent Kennedy had slept here. “They need another plaque,” I commented to Christian Times editor, Don­ald Crawford, “that says ‘Kimo and Komi slept here.’ ”