Chronicles – “In the Right Place: The Children’s Home in North Carolina”

“I t just happened that I was in the right place when God chose to start it,” the Reverend A. V. Childers recalled in a 1978 interview about the founding of the Church of God Children’s Home in Concord, North Carolina. On Monday, January 10, 1944, an elderly couple called the Elm Street Church of […] 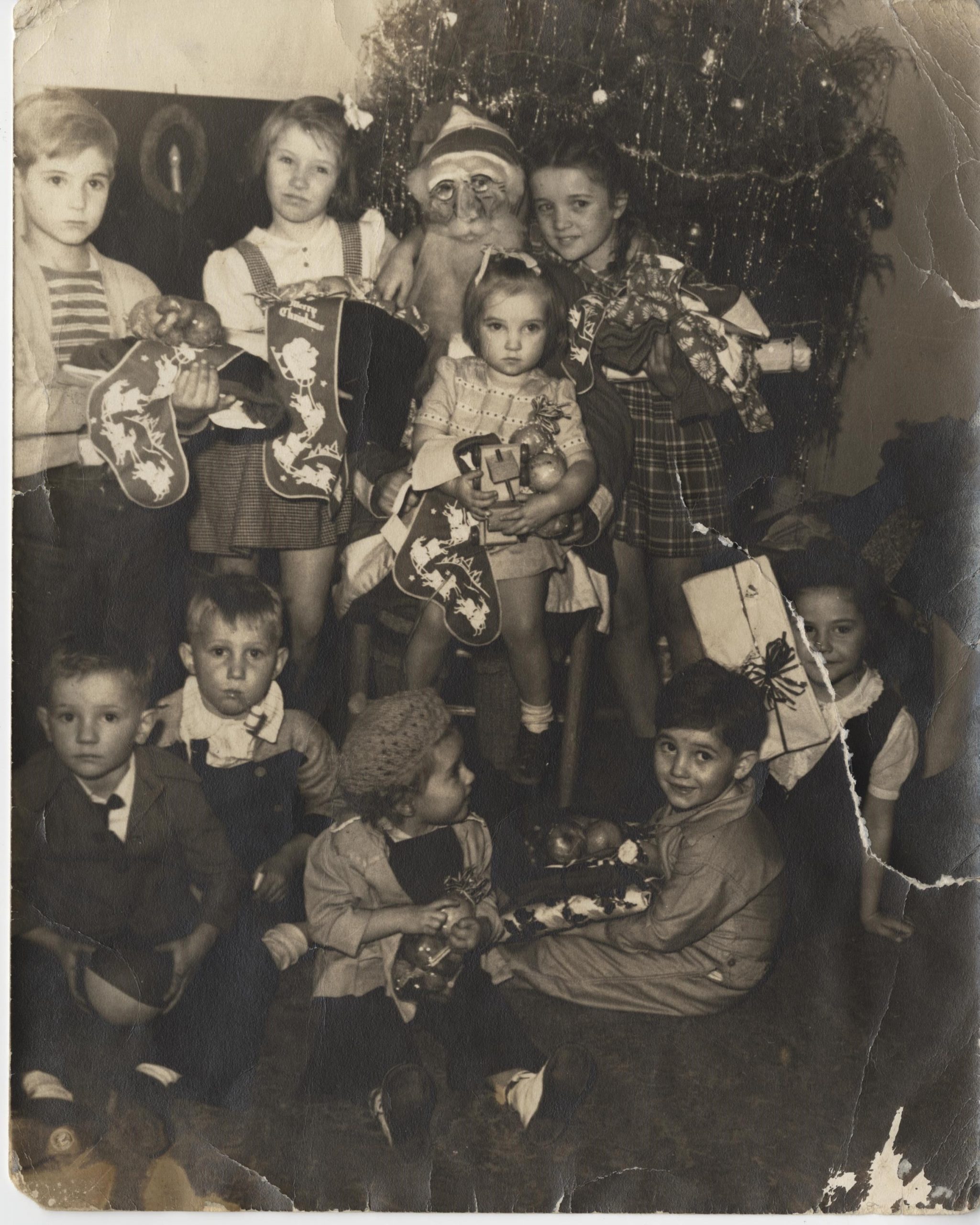 Ann and Ethel Haney stand on each side of Santa at the first Christmas party at the children’s home in 1944.
“I

t just happened that I was in the right place when God chose to start it,” the Reverend A. V. Childers recalled in a 1978 interview about the founding of the Church of God Children’s Home in Concord, North Carolina.

On Monday, January 10, 1944, an elderly couple called the Elm Street Church of God parsonage in Kannapolis to speak to Pastor Childers. They repeated a story they had already told without success to five other ministers: Two young girls had been abandoned in their home. Childers said about the couple, “They weren’t members of my church. They weren’t even Christians, but they remembered hearing my program on the radio and called me.”

The next day, Pastor Childers made his way to the home where Ann and Ethel Haney had been left by their father. Brother Childers and his wife took responsibility for the girls and began to inquire if any orphanage in the area could take them in. The orphanages reported they were full, and even the local welfare department offered no assistance. An appeal for help on the church’s radio program reaped some clothes and other necessities for the girls.

The next Sunday, hearts of the Elm Street congregation opened and folks began to lay money on the altar to care for Ann and Ethel. “I didn’t ask them to—they just started coming,” Pastor Childers remembered. “They laid more and more money on the altar, along with jewelry and other items.” By the conclusion of the Sunday-evening service, members and friends had donated $10,000.

An article in the local newspaper and conversations throughout the community captured the attention of Cannon Mills President Charles A. Cannon, who called Pastor Childers to ask how he might assist. Cannon Mills had established the mill village of Kannapolis, and Mr. Cannon reportedly was impressed with the work ethic of Church of God members who worked in his plants.

Expressing concern for more than just the two girls, Mr. Charlie (as he was affectionately called) suggested Kannapolis might need an orphanage.

Soon Charles Cannon contacted Pastor Childers a second time with news of the availability of a former goat farm. Mr. Cannon purchased the nearly seven acres with a large house and signed the deed over to the trustees of the church.

As news about the developing orphanage became public, other children began arriving at the door of the Church of God parsonage. One mother left her son, about five months old, on the living room couch without any explanation. The Kannapolis Children’s Home opened in fall of 1944 with nine children and four workers.

According to Pastor Childers, there were numerous legal issues to resolve before starting the home. North Carolina state officials doubted there would be enough financial assistance to sustain an orphanage and threatened to jail Childers if he opened the home.

Charles Cannon committed support, and Cannon Foundation continued that commitment following his death. Later, Church of God ministers in North Carolina voted to adopt the home, which they incorporated as The Church of God Orphans and Children’s Home of North Carolina on February 1, 1945.

Church of God members and friends remain faithful, and congregations throughout North Carolina bring offerings to the home during their annual Harvest Festival. Last October, the home celebrated its 75th anniversary under the leadership of Kenneth and Jane Hudson, along with state administrative bishops Kenneth R. Bell and Dennis Page.

The Church of God Children’s Home of North Carolina continues to be a choice place for God’s people to serve children in need.

David G. Roebuck, Ph.D., is the Church of God historian and director of the Dixon Pentecostal Research Center on the Lee University campus. [email protected]