A Story of the 503rd Airborne Infantry in Vietnam 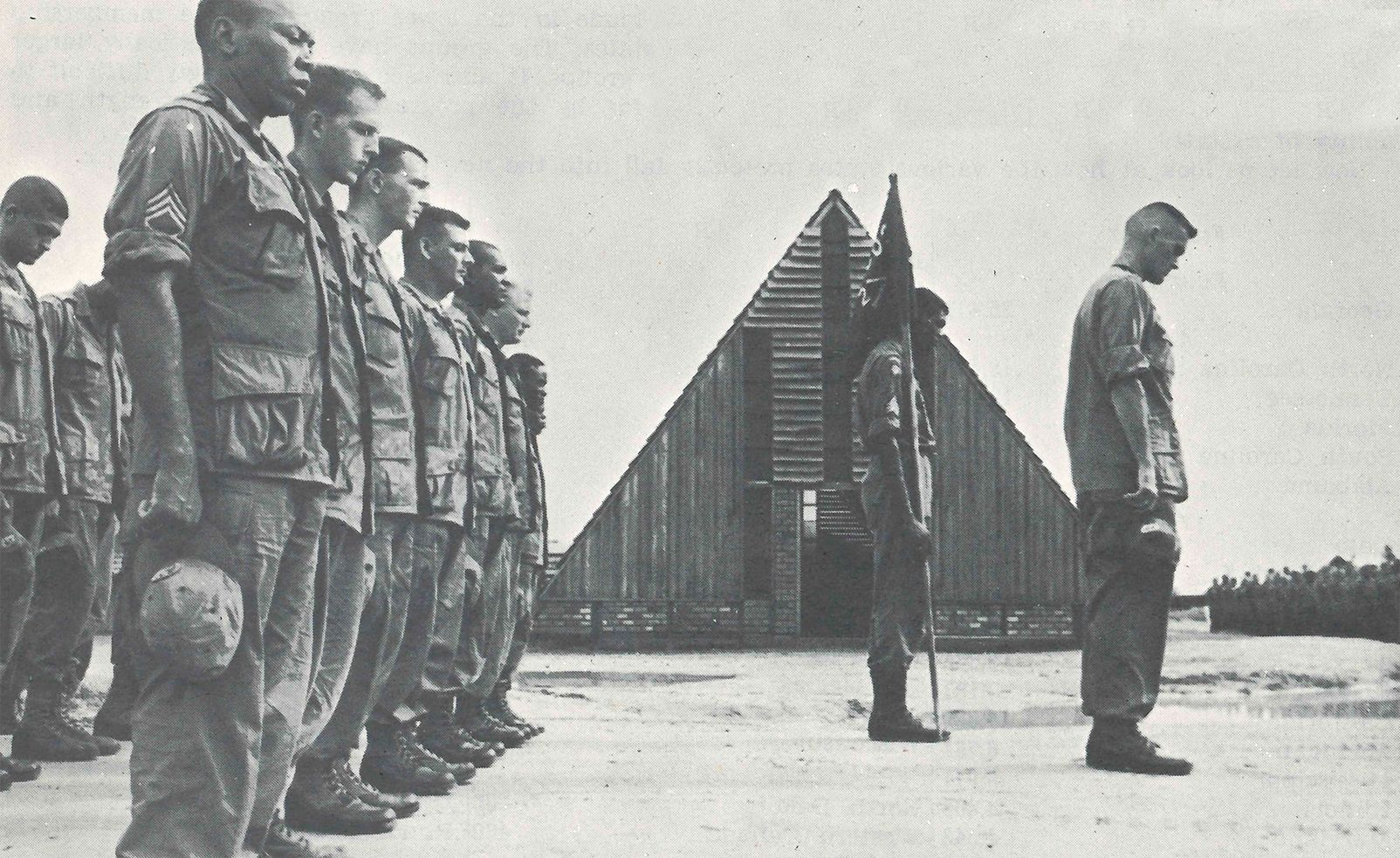 Solemn moments. The Second Battalion pauses in honor of fallen com­rades after Bien Hoa. Chaplain (Capt.) Robert Crick is the chaplain to this airborne brigade.

E TRY HARDER”: this is the motto of the Second Battalion, 503rd Airborne Infantry, stationed in South Vietnam. Significantly, this unit was known in World War II and in the Korean conflict as “The Rock.” These paratroopers of yesterday wrote their reputations in blood during combat assaults in New Guinea, Leyte in the Philippines, and finally its most notable World War II operation, the parachute assault upon the Japanese stronghold on the island of Corregidor.

Although outnumbered five to one by the Japanese defenders, on March 2, after two weeks of heavy fight­ing, the bomb-gutted fortress of Corregidor was for­mally turned over to the General of the Army, Douglas MacArthur, by the 503rd.

But again in Vietnam the 503rd Airborne Infantry stands firmly in the defense of freedom. Being the first combat unit to arrive in Vietnam in early 1965, these sons of freedom, many who only a few days before had left their hometown setting-sweethearts, wives, mothers, and fathers-now stood their ground in a strange, hot and humid, jungled, infested land. Jungle and guerrilla warfare was new to this young generation, and they learned the hard way. Booby traps, claymore mines, snipers, punja sticks, and many other horrors of war took its early toll. But these young fellows-mostly eighteen to twenty years old­ became men overnight. Being airborne troopers, and having withstood the rigorous training of parachut­ing, they naturally adapted to the situation more rapidly than other soldiers.

The jungles, long the haven of the Communist Viet Cong (VC), frightened these young paratroopers. But; in order to overcome their fright, they drove deeper into the jungles and harder than ever before. The 503rd Airborne Infantry overnight became a respected name among the VC.

New historical references began to pop up: War Zone D, Mekong Delta, Pleiku, An Khe, and many oth­ers. It was here that many a young trooper gave his life’s blood in defense of freedom. But almost over­night the Communist strongholds began to break; free­dom again became a possible reality for the people of South Vietnam.

Possibly as you read this the Second Battalion, 503rd Airborne Infantry-the “we try harder” battal­ion-fights its way through some new jungle terrain in pursuit of the Viet Cong.

With this Airborne Battalion, experiencing the same discomforts of war that the lowest private encounters­ sniper fire, mortars, rain, leeches, mosquitoes, booby traps, and the like-is our only airborne Church of God chaplain, Captain Robert Crick.

Chaplain Crick, in addition to being our first air­borne chaplain, is also the first Church of God chaplain to enter a combat zone. A volunteer to airborne-with over fifty parachute jumps-and to Vietnam, this minister of the gospel is as dedicated to his young soldier parishioners as any hometown pastor is to his congregation. “These are my men-my breed,” is a favorite expression of Chaplain Crick. He once stated to a congregation in Atlanta: “These young troops are tough; among them are some of the most obscene and filthy speaking soldiers in the United States Army. But get one of them genuinely converted, and they have the same vigor and drive for the Lord’s work that they had before for Satan.”

Having been an enlisted man himself, Chaplain Crick has a genuine understanding of the soldier and his problems. In fact, it was while in the service as a private that Chaplain Crick began his ministry and started preaching the gospel. Upon leaving the service he attended Lee College. He graduated with a bache­lor’s of science degree from Trinity University, San Antonio, Texas. He went on to Vanderbilt University, where he received his bachelor of divinity degree. But the call to the chaplaincy and to these young soldiers never left him. Captain Crick entered the United States Army as a chaplain in 1961, having completed tours in Germany and the United States; presently he is in Vietnam.

From his own experiences Chaplain Crick tells us of a recent operation with his battalion:

“It was ‘Operation Toledo,’ conducted in the central and southeast mountain ranges of Vietnam. This was the so-called monsoon season, and our mission was to keep the Viet Cong from any big drives during these heavy downpours. My battalion was chosen as the assault unit; we were to fly in by helicopter to secure a landing zone so that our entire brigade, the famed 173rd Airborne, could set up a command posi­tion. The day before departure, chapel services were held, and many a young trooper bowed his head in sincere dedication to God. There was no time for play, it was all business from here on out.

“We boarded the copters with six combat-equipped paratroopers in each copter. It was a thirty-minute flight-just time enough to think of home, family, and of course God. We had the word that our landing zone was ‘hot,’ an expression meaning that the Viet Cong had a reception waiting for us. The way it turned out, however, the VC had pulled out leaving only a few snipers for harassment purposes. No one was hit-we were on the ground, in Charlie’s (VC) territory, and indeed all of us had so much to be thankful for.

“The next few days were uneventful-a few snipers and mortar rounds-but so far no real contact. We dug in deep, sent out patrols day and night, and most of all we waited. We knew the Viet Cong were out there; our ambush squads had picked up their trails several times; yet, they avoided us like the plague.

“It was late Saturday night. I had already crawled into my improvised tent (two ponchos tied together) since a light rain was falling. The sky was pitch-dark. Suddenly there was a tremendous explosion that lit up our entire front line, a cry of pain, and then that ever-dreaded yell: Medic! I was on the scene about the same time as the battalion doctor arrived. There before my eyes were twelve of my troopers from A Company, hit by a large claymore mine. Blood and torn flesh showed itself visibly even in the night.

“The doctor and his medics worked frantically and then one by one three troopers were laid aside from the others-carefully their buddies wrapped them in ponchos. Life no longer remained for these, they were about to take that last journey home. I ministered and prayed with the wounded. One young soldier, sustaining a chest wound, looked into my eyes after I had prayed, stating ‘Chaplain, you reckon the Lord still loves me?’ ‘Yes, He loves you more than you shall ever realize-now more than ever before.’ One by one the wounded were loaded upon a ‘dust off’ (medical evacuation copter)-for them it would be the best hospital care possible and a long period of recovery.

“Things quieted down and I knelt beside the dead, my fallen comrades. I removed the ponchos from around their faces-each of them I knew personally. All were young privates with backgrounds varying from one another. One was a Southern Caucasian, another of Japanese/ American descent, and finally a Negro lad from a large Northern metropolis. In their minds there had been no racial or cultural difficulties-each in his own way had volunteered for a part in the vast defense of freedom. They had done their jobs well.

“I am a firm believer that though God does not nec­essarily bring about tragedy, He certainly uses the oc­casion to further His Kingdom. The next day after we were hit so hard by the VC, Sunday, our services were crowded with young men anxious over the question of life and death. ‘There are no atheists in the foxhole’ is an often-used expression, but nevertheless this proves to be true as the first rounds are fired on the battlefield. That Sunday we had thirty-eight deci­sions; men from every walk of life came forward to accept Christ as their personal Saviour. Our hearts truly rejoiced over the abundance of God’s love and the joy that filled the faces of these new converts.

“The next morning we moved out, but not without incidents. Sniper fire was prevalent, and one of our squads was blasted by a grenade. One of the men killed that day was a lad who just the day before had accepted Christ as his Saviour. As you can imag­ine, the message of Christ is an urgent and rele­vant word to our men in Vietnam.

“For the next two weeks, fighting heat and rain during the day, mosquitoes and leeches at night, the battalion moved through the thick jungle in search of the VC. The Viet Cong, never a match for American paratroopers, had broken down into small groups in order to escape. Foot by foot the twisted bamboo and vines had to be cut through-if Charlie was there we were determined to find him. Occasionally one of our companies would come upon VC rice and armament storage areas, and a handful of Viet Cong guards who vainly attempted to protect their supply points. But all in all, the rest of the mission was without major incident.

“We had been out in the jungles now for twenty-six days. The humid weather and jungle terrain were beginning to take their toll with malaria patients, bamboo poisoning, and sore feet. When the news broke that our mission was near completion and that the battalion was returning to base camp, every heart was glad. The greatest reward for the soldier awaited us: hot chow, a shower, and a good night’s rest.

“However, our mission was not quite over yet. Re­turning to base camp, the entire ‘We try harder’ bat­talion assembled in front of the chapel which the men built themselves in their spare time. There a memo­rial service was held for our fallen comrades. I con­ducted a worship service, while in the background taps played softly. Our men disassembled slowly and without a spoken word. Victory had been ours, but somehow we had little feeling for rejoicing.”

*An added special note of interest: We have received recent word from Chaplain Crick that during the past six months since he has been in Vietnam, over two hundred men have been converted to Christ. Several baptismal services have been held, and presently he is organizing a fellowship of Christian paratroopers into a witness group called “Skysoldiers Christian Fellowship.” He informs us that we will be hearing more of this group in the near future.