‘To All Who Are Afar Off’

The Incredible International Growth of Pentecostalism 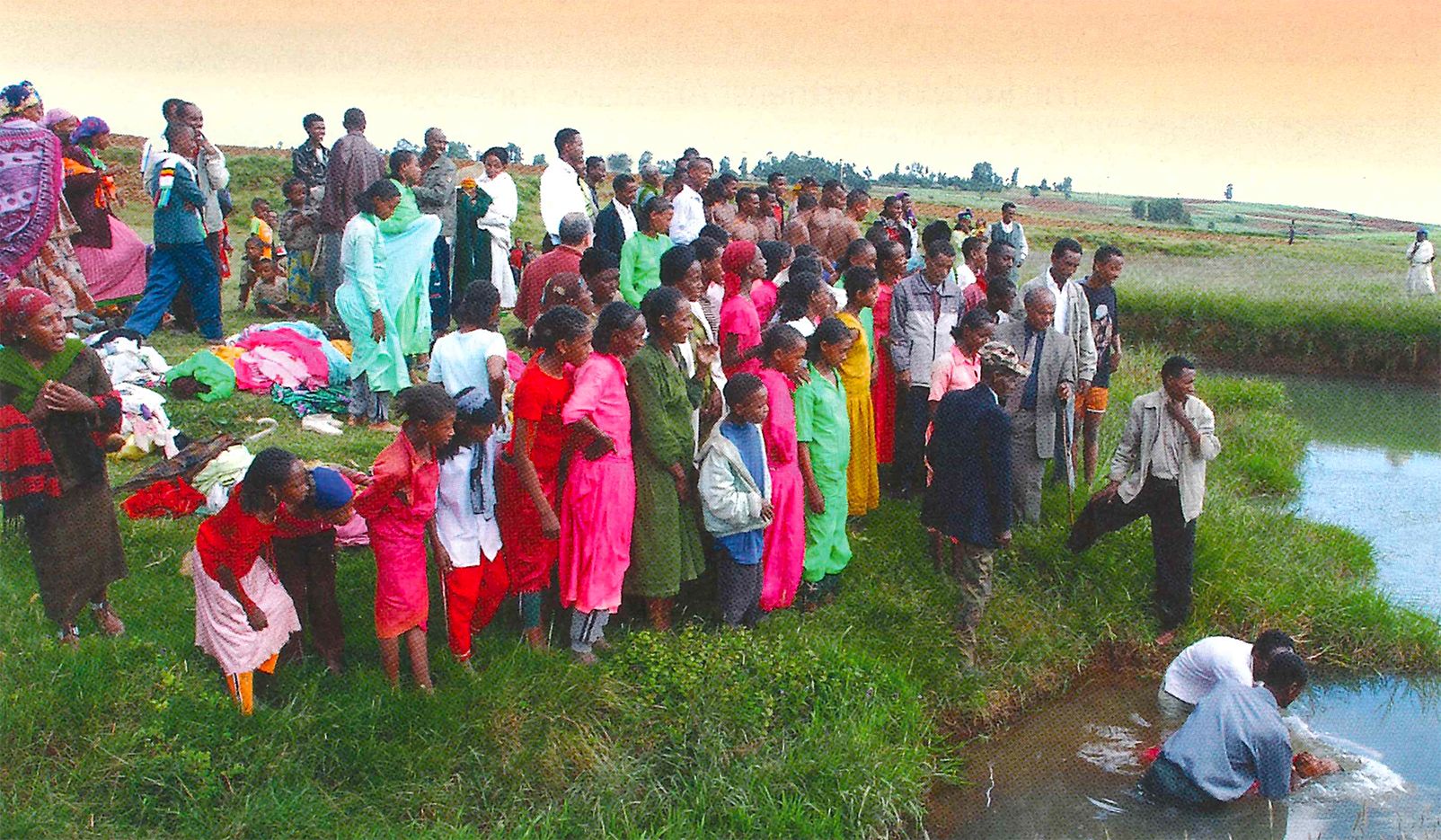 A baptism service among the Selale Oromo people in Ethiopia
T

HE FINAL WORDS of Peter’s Pentecost Day sermon declare the promise of salvation and the Holy Spirit “to you and to your children, and to all who are afar off, as many as the Lord our God will call” (Acts 2:39 NKJV). Fulfilling that word, the message of Pentecost today reaches around the globe.

Spreading as a Flame

Pentecostal and Charismatic believers numbered more than 500 million at the beginning of the 21st century. They are spread across 8,000 people groups and 7,000 languages, and they grow exponentially each year. Some believe that number now exceeds 600 million.

For a movement that could probably count its local congregations on the fingers of one hand in 1900 to a globecircling ecclesial power in 2013, second only to the Roman Catholic Church in numbers of adherents, the explanation for the growth of Pentecostalism must be a spiritual one.

The Church of God has planted congregations in 179 countries and territories outside the United States and Canada since its missions beginning in 1910. More than 80 percent of the church’s approximately 7 million members are, from the North American perspective, “those who are afar off.”

With a few exceptions where the church is not as active evangelistically, the growth continues to be strong and healthy and, in some places, astounding.

The Church of God in Guatemala is the largest Protestant denomination in the nation.

In Haiti, despite the setbacks of 2010 when an earthquake damaged 74 church buildings, growth continues unabated.

In Bolivia, the number of congregations has increased by a third in the past two years. Latin America predicts that the 8,000 churches it had in 2010 will double to 16,000 by 2020, and they are on track to meet the goal. The fires of revival burn around the world.

What Does This Mean?

The onlookers on the Day of Pentecost, witnessing the phenomenon of people speaking in languages they had not learned, asked, “What meaneth this?” (Acts 2:12). The world today, seeing the unparalleled growth of Pentecostal churches, also seeks answers.

Sociologists of religion offer their theories, usually based on socioeconomic and class-analysis factors. Pentecostalism has grown, they say, because people saw themselves as being without social and political power, and the new movement offered it to them. Although the poor were oppressed and had a poor self-image, Pentecostalism said they were worthy and valued, even to the point that they could enter the very presence of God by themselves. The movement originated at a time when industrialization was replacing an agrarian lifestyle, and the people felt estranged and at odds with the changes. The heart of the Pentecostal message was that Jesus was coming soon, and they would be elevated in status by His coming. Speaking in tongues provided psychic escape through religious ecstasy, they claimed. These are the explanations of some secular social historians.

Others saw the roots in changes in theology and doctrine that were sweeping the nation’s churches. The Holiness Movement inspired the birth of more than 25 new denominations in the last quarter of the 19th century and the first years of the new century. Both Wesleyan-Holiness and Keswick-Reformed influences shook the moribund historic churches. Still other theoreticians saw the Populist movement in political life that took the United States by storm as a major influence in gaining popularity for the new religious movement.

Those who view the origin of Pentecostalism with spiritual eyes understand it, as the apostle Peter did, as a fulfillment of the Old Testament prophet Joel’s prediction of a “latter rain”—a time when God’s Spirit would be poured out and a new era of refreshing and salvation would be ushered in. The preachers among the early Pentecostals made this the theme of much of their preaching: God has visited the earth anew to prepare a holy people who would announce the good tidings of the gospel of the Kingdom and get the world’s people ready for the Second Coming.

This emphasis motivated the mission movement that took Pentecostalism to nations around the world within a few years of the outpourings near the beginning of the 20th century in Tennessee, North Carolina, Kansas, Texas, and California.

Reports have been circulating that the Coca-Cola International Corporation has a business plan to get a cold Coke within one mile of every person on earth by the year 2020. An evangelical magazine article suggests that the aim of the church ought to be to beat the Coke truck to that goal. The Church of God is in tune with that thinking.

Missions zeal continues to move among Church of God people. Writing recently, World Missions Director Tim Hill quoted the familiar Oswald J. Smith challenge, “Why should anyone hear the gospel twice until everyone has heard it once?” When Christ gave the church the Great Commission, He made us accountable, Hill said. The Cain mentality asks, “Am I my brother’s keeper?” but the New Testament perspective answers, “For I have a great sense of obligation to people in both the civilized world and the rest of the world, to the educated and uneducated alike” (Rom. 1:14 NLT).

In 1967, the Church of God and an indigenous Pentecostal movement in Indonesia, Gereja Bethel, entered into a partnership. The progress of Gereja Bethel is nothing short of phenomenal. In 1970, the group had 135 ministers and a little more than 11,000 members. Within 20 years, the number of congregations had already reached 1,076. In 2010, that number had exploded to more than 5,000 churches embracing more than 2 million members, including several churches of more than 10,000 members. The congregation headquartered in Sentul City, Jakarta, led by Pastor Niko Njotorahardjo, now approaching 200,000 members, is by far the largest local congregation in the Church of God.

The Cerro Grande Church in Tegucigalpa, Honduras, welcomes 11,000 members each Sunday, and their pastor is a woman, Ana Ruth Diaz. Bethsaida Temple in Durban, South Africa, has more than 10,000 members. Elim Pentecostal Church in Timisoara, Romania, has 4,800 members, and three others in the nation have more than 3,000. A congregation in Bujumbura, Burundi, has reached 1,500. The Rue du Centre congregation in Port-au-Prince, Haiti, has 9,000 and the Frontera Church in the same city has 8,000. Two churches in Jamaica have more than 3,500 members each. Numerous stories could be told about local churches that are powerfully impacting the cities where they minister.

God has greatly blessed the Pentecostal Movement and the Church of God. Jesus taught, “For everyone to whom much is given, from him much will be required; and to whom much has been committed, of him they will ask the more” (Luke 12:48 NKJV). Although we have outstanding local churches in many places among the 36,940 congregations of the Church of God, and some of them live in prosperous conditions, the greatest number minister among poor people. More than half the world’s people live on less than $2 a day; in Southeast Asia the figure rises to 71 percent, and in sub-Saharan Africa it is 70 percent. The churches in those parts of the world cannot accomplish their soul-winning and church-planting goals without outside help.

The Church of God wants to be there . . . ahead of the Coke truck, if possible.