by Kashif A. Graham 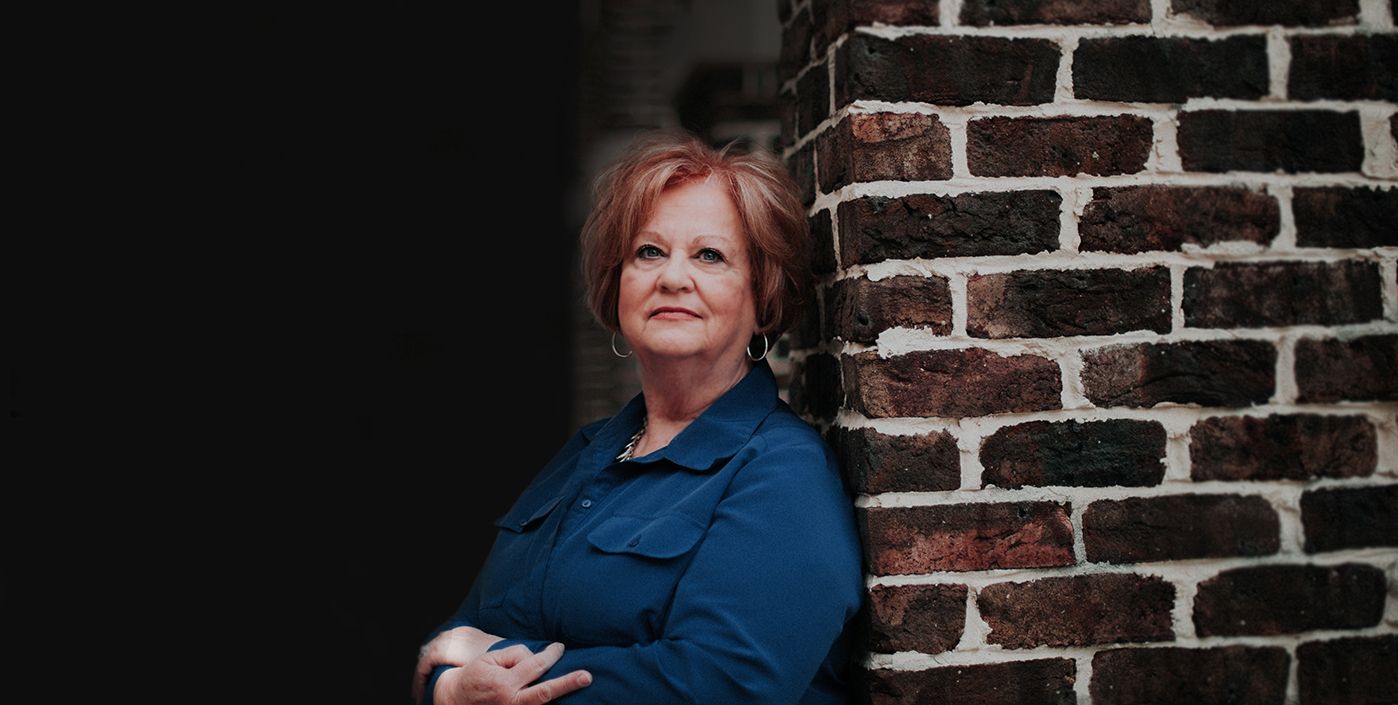 Her eyes were wide with horror, knowing he was going to strangle her. She was acquainted with the cycle of abuse . . . and the tension had been rising again.

She does not remember what her husband was angry about, but she can still hear the sudden fright in his voice: “I can’t touch you!”

His face became placid as he felt his arms lock in place. In the middle of their Kentucky home, Joyce and Jimmy had experienced God’s intervening power.

oyce stood out to me at our first encounter. We both enrolled in a discipleship course at the Pentecostal Theological Seminary. Her strawberry blonde “drama hair,” as she calls it, has a language of its own. But it was the manner in which she openly discussed her marriage on the first day of class that was unsettling. How could someone who had experienced such pain feel so free to share?

I jumped at the chance to talk with Joyce. Over coffee and sweet tea, she walked me through her story.

Joyce Ann DuRall was born in 1953. Her house was not a quiet place, as she had five siblings. She would later feel a sense of responsibility in regards to her two younger sisters, paying for their band and cheerleading activities. As Joyce described her mother, her ocean blue eyes danced: “She was a platinum-blonde beauty, and she knew it.”

Joyce’s mother was from Harlan, a mountainous region in eastern Kentucky. Her father was a Chevy-drivin’ all-American from Muhlenberg County in western Kentucky. During Joyce’s early years, he worked as a sharecropper, and then for an auto-parts business.

Joyce graduated high school in 1971, with plans to attend Lee College (now Lee University) in Tennessee. However, when she arrived at an SAT testing center, the necessary paperwork was not in her purse, so the proctors would not admit her. In that moment, she heard the voice of the Lord, accompanied by two hands on her back: “I will redeem the time.”

While waiting for life’s direction, Joyce worked at Big John’s, a small grocery store managed by her father. She oversaw coupon circulation and helped keep the payroll low. During those mundane days she met her future husband—someone who would bring her great joy, but also much pain.

Joyce and her family visited a small Pentecostal church one night, and Joyce was immediately smitten. There he was, playing the organ. Jimmy leaned over to one of his fellow musicians and said: “You see that girl that just walked in? I’m going to marry her.”

Although his friend mocked him, it happened.

In 1974, a few months after meeting, the two became one. They moved into an upscale mobile home.

Jimmy worked the surrounding area as a farmhand. Once, he called Joyce outside and left her to face the cows. A self-proclaimed city girl, Joyce was frightened, and quite sure the cows would eat her. The two shared a laugh, but this season marked the beginning of the abuse Joyce would suffer.

It was initially verbal. He would criticize Joyce for her housework, and compare her to his mother. “I just dished it back,” Joyce recalls.

She felt isolated. Jimmy did not want her to spend much time with her family, and she did not have a relationship with his. Things grew worse with the birth of their first son. Only five weeks postpartum, he quit his job. He told Joyce, “If you want this baby to eat, you’d better get a job.”

The first episode of physical abuse took place after their second son was born. It happened in their car. Daniel and David watched while their mother was slapped across the face in the heat of an argument.

Why didn’t Joyce leave after the first occurrence of physical abuse? She said, “I didn’t have any skills, or anywhere to go. And I thought I would lose my children.”

Joyce was also the victim of marital rape. At that point she did leave, taking her children along. A friend took her to a spousal-abuse center in Lexington. She was scared for her life, but even more afraid that she would have to tell her secret. Her counselor taught her about the circle of violence—blow-up, honeymoon period, tension, and then blow-up again. She told Joyce, “At some point, you have to break that cycle.”

Joyce thought, Me? A weakling?

She stayed with a friend after she left the center. Her friend’s husband spoke deep words of affirmation: “God made you the way you are. You are not a whore.”

The man cried with Joyce. It was the first time she had heard such rich words of validation from a man. She describes that stay as a landing place. Her children slept well. But this euphoria did not last long, as her husband soon found out where she was and came for her. He arrived with a pastor, who told him to grab the kids and leave. That same pastor later told Joyce if she kept a better house, her husband would not have hit her.

There was a season of reprieve. Oddly enough, it came from Jimmy. He had the idea of renovating a former town hotspot, the Country Kitchen. At first, Joyce was skeptical. He had never been able to keep at anything for more than a few months. However, she soon began to see his vision.

The restaurant, renamed Jim Dandy’s, mushroomed. They bought a new tri-level house and two new cars. They bought wedding rings again. Joyce was dubious, but she hoped their marriage would improve along with the business successes.

The first physical episode of abuse took place after their second son was born.

The growth of the restaurant necessitated new staff, and Joyce’s in-laws were available. However, old tensions soon started to arise, and Joyce no longer felt welcome in her own restaurant. This led to further physical and emotional abuse.

Joyce left, and it was rumored she suffered a nervous breakdown. The truth that she went to a spousal-abuse center eventually came out. They lost the restaurant in March 1991.

Joyce’s sorrows continued until November 1997, when the two finally divorced. She had confronted Jimmy about having an affair. He was enraged, and vehemently denied it. Joyce felt the power and presence of God fill the room; in her words, a fog descended and her husband went limp.

To leave was a difficult decision for Joyce, as her sons, then 19 and 21, opted to stay with their father. She was deeply afraid that he might harm them physically during one of his bouts of anger, but she knew she could no longer stay.

Joyce was then working as a case manager for the state’s Family Support Division, which helped her regain confidence in her abilities.

A few years after their divorce, Joyce received a healing surprise.

“I called to speak with my sons, and his voice was on the line. He said, ‘Joyce, I want you to know that I’ve asked forgiveness for everything—and I mean everything I did. And I want you to have a good life, and to meet somebody. I want you to be happy.”

That day would have been their 25th anniversary.

In March 2001, Jimmy was diagnosed with pancreatic cancer. His life would soon come to an end. His calls to Joyce grew more frequent, and during one conversation he groaned, “Joyce, I’m so skinny that I can hear my bones rattle whenever I turn over.”

On the weekend Jimmy died, he and Joyce were coincidentally attending two separate prayer conferences in Ohio. By this time, hospice was already involved in his situation. He died at the conference center, with his family praying over him.

Joyce’s voice faltered, “I really did love him. I thought for many years that I did not, but I did.”

It was the most peaceful funeral Joyce had ever attended. Jimmy was buried in the hills of Kentucky on the family’s property.

In regards to her progress since his death, she says, “We’re still digging ourselves out. I struggle with the guilt—I think that I should have left sooner.”

Yet she has victories she celebrates. Joyce can now wear a scarf without feeling like she is being choked. Where she once felt silenced, she now openly discusses her experiences.

Joyce wants people in domestic-abuse relationships to immediately seek help and to know this: “Jesus is touchable and moved by the way you are treated, abused, rejected, and misunderstood. Jesus endured the same kind of treatment. He resurrected whole and healed. You can too. His mission was to seek out and heal the oppressed and hurting. He seeks you.”

The years are being redeemed, as Joyce is now pursuing her master of arts in clinical mental-health counseling. She beamed, “I just want to serve from the heart.”

Kashif A. Graham works at the William G. Squires Library and is completing his studies at the Pentecostal Theological Seminary.