Whatever the fire touches becomes what the fire is. 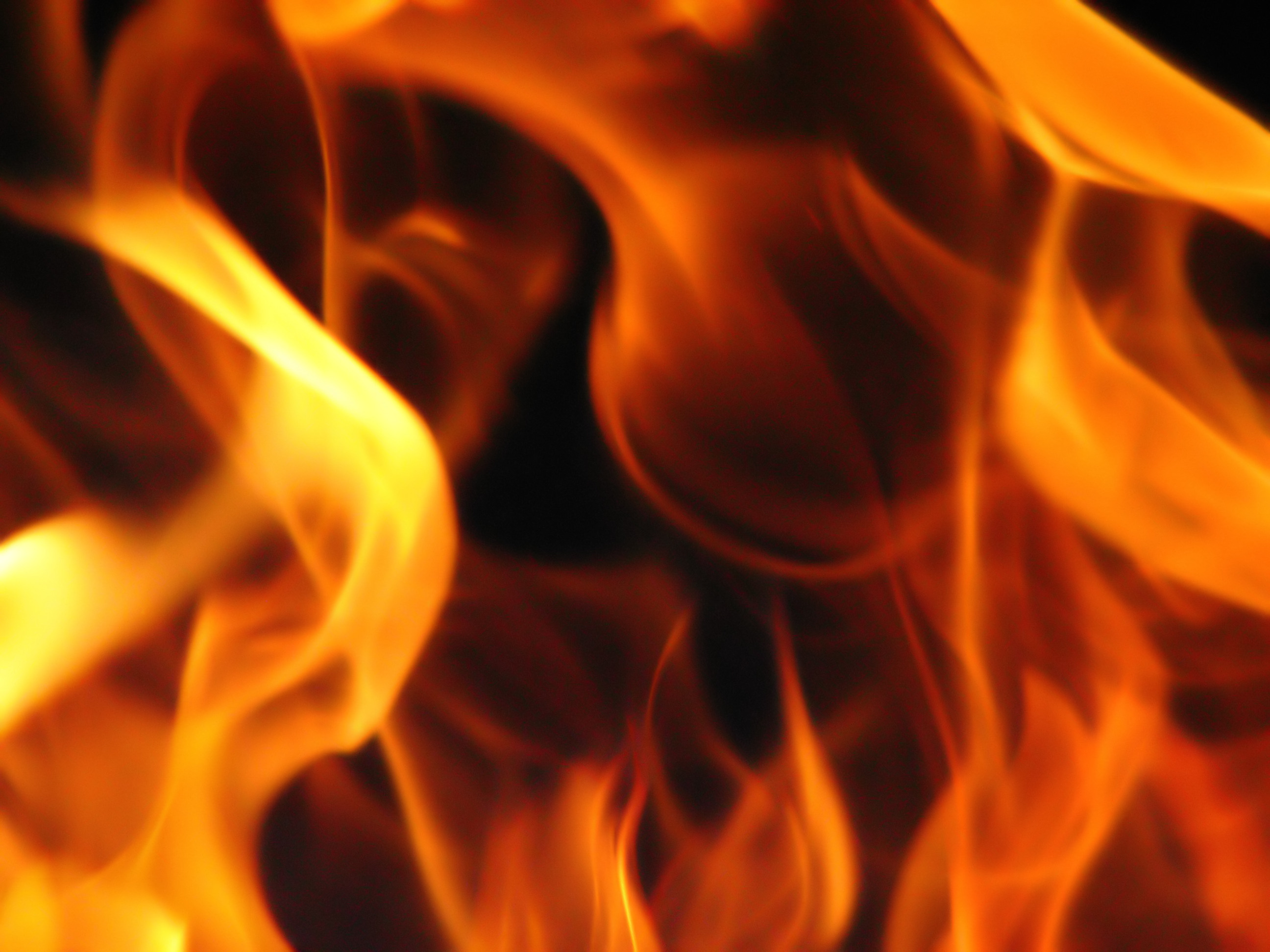 eather-worn and bronzed by the desert sun, John the Baptist stood near the muddy Jordan River, where he had baptized the many people who had been convinced and converted through his preaching. Raising his sunburned arms in the air, signaling for the crowd’s attention, he began to speak with purpose and passion:

I indeed baptize you with water unto repentance: but he that cometh after me is mightier than I, whose shoes I am not worthy to bear: he shall baptize you with the Holy Ghost, and with fire (Matt. 3:11).

When John said “and with fire,” it was more than a mere verbal addendum to what was already a complete and descriptive announcement. The contrast between the two baptizers is interesting:

• John baptized in a river of cold water; Jesus baptized in what some refer to as a “river of fire.”

• While one man baptized in water that outwardly testifies, Jesus baptized with fire that inwardly purifies.

Today, baptism is largely a religious word, but 2,000 years ago it was also a commercial word associated with dyeing cloth. The cloth was dipped, or baptized, into the dye until it accepted the nature of the dye. The cloth looked and smelled like the dye. The cloth had been dipped in the dye, but now the dye was in the cloth.

A. B. Simpson wrote:

The baptism of John represented the cleansing of our life and conduct, the reformation of our character, and the work of the law and the truth upon human hearts. But Christ’s baptism was by fire, and went to the roots of conduct. The purity He required included motives, aims, and the “thoughts and intents of the heart.” He not only requires but He gives the purity that springs from the depths of our being. Like the flame that consumes the dross and leaves the molten metal pure and unalloyed, so the Holy Ghost separates us from our old sinful and self-like nature and burns into us the nature of the life of Christ (The Holy Spirit).

The Spirit of Burning

As with other Scriptural emblems such as water, wind, and oil, fire is used to help indicate and illustrate the nature and effect of the Holy Spirit’s mission on the earth, within the believer, and inside the church. Throughout the Bible, fire is used to symbolize our heavenly Father’s presence (Ex. 3:2), approval (Lev. 9:24), protection (Ex. 13:21), purity (Isa. 6:1-8), enablement (Acts 2:3), and, yes, even judgment, for Hebrews 12:29 declares, “Our God is a consuming fire.”

William Evans, writing in The Great Doctrines of the Bible, said one of the names ascribed to the Holy Spirit is “the Spirit of burning.” Evans cites two scriptures: Matthew 3:11 (“He shall baptize you with the Holy Ghost, and with fire)” and Isaiah 4:4 (“When the Lord shall have washed away the filth of the daughters of Zion . . . by the spirit of judgment, and by the spirit of burning”). This cleansing from filth is done by the blast of the Spirit’s burning. Here is the searching, illuminating, refining, dross-consuming character of the Spirit. He burns up the dross in our lives when He enters to take possession.

The fire of the Holy Spirit is incomparably distinctive. Occasionally, someone reminiscent of Nadab and Abihu (Lev. 10:1-3) arises to advocate the latest in modern-day counterfeit fire, feeding off carnality and promoting sensationalism, excess, and self-glory. However, the authentic fire of the Holy Spirit feeds the soul with divine nutrition, producing a profound inward life with God.

True fire has its seat in the heart. It melts the affections . . . and all its furnace flames are centered in the love nature. False fire runs up into the head and centers itself in the imagination and produces rashness and impractical schemes. It produces an unbalanced view of truth. True fire produces great tenderness of spirit and a yearning in the soul for the welfare of everyone (apologeticsindex.org).

As God’s children, we should expect nothing less, but rather anticipate even more, that the fire of God will serve as a defense and protector in this day of increased spiritual and natural conflict. Zechariah 2:4-5 records this divine promise to Jerusalem’s inhabitants: “Jerusalem will be a city without walls because of the great number of people and animals in it. And I myself will be a [protective] wall of fire around it . . . and I will be its glory within” (NIV).

While walls speak of protection, they also speak of boundaries and limits. This passage promises expansion and protection at the same time. The natural limits imposed by walls of stone will be eliminated, but security will not be compromised because the divine Protector will Himself become a wall of fire around the city.

I’m convinced this fiery promise speaks just as prophetically to the Church of God today. I hear the Lord saying, No more limits, but no less protection. While the limiting walls come down and the church is enlarged to reap its greatest harvest, the limitless protection of God’s presence of fire will also sustain, equip, and empower the church for greater advancement as we approach the day of the Lord’s coming.

I hear the Lord saying to the church, “No more limits, but no less protection.”

In Revelation 3:16, Jesus warned of an age of lukewarmness that the church must resist. Vance Havner described this condition as being “a little too hot to be cold and a little too cold to be hot” (Hearts Afire).

Tepidity is a slow but certain invader to any substance removed from the fire. Rather than the substance affecting the environment, it eventually becomes affected by the environment and cools to the point of meaningless coexistence. There is nothing desirable about a tepid church removed from the fires of revival. It is ultimately cooled by a carnal environment until it takes on the nature and temperature of the place it was intended to impact.

On the Day of Pentecost, the crowds were drawn by the fire of the Spirit’s presence. Then and now, people are attracted to godly passion and conviction.

“Men ablaze are invincible,” said Samuel Chadwick. “Hell trembles when men kindle. The church is powerless without the flame of the Holy Ghost. Destitute of fire, nothing else really counts; possessed of fire, nothing else really matters. Without the flame and fervor of the Holy Ghost, the church will never accomplish its mission.”

Fire is a wonderful picture of the work of the Holy Spirit, reminding us and exemplifying to us God’s presence, purity, and passion.

As a boy, I would watch when my father built a fire. He would take the fireplace poker and arrange the logs while also stirring the embers. After a while, the tip of the poker would glow red with heat. Before the poker would cool, it seemed it could touch anything and set it ablaze, because the poker had been in the fire long enough for the fire to get into the poker. The poker had become one with the fire. I learned that whatever the fire touches becomes what the fire is.

In Isaiah 6:6-8, we read how Isaiah experienced oneness with the fire of God when the coals from the altar were placed on his lips, taking away his iniquity and purging his sin. His life and prophetic ministry became synonymous with the fire that had consumed him, and he cried to the Lord, “Here am I; send me.”

May we as Christians today be so united with the fire of the Holy Spirit that the resulting mission to carry the Gospel to the lost will be accomplished.

Tim Hill is General Overseer of the Church of God.