Children of the World 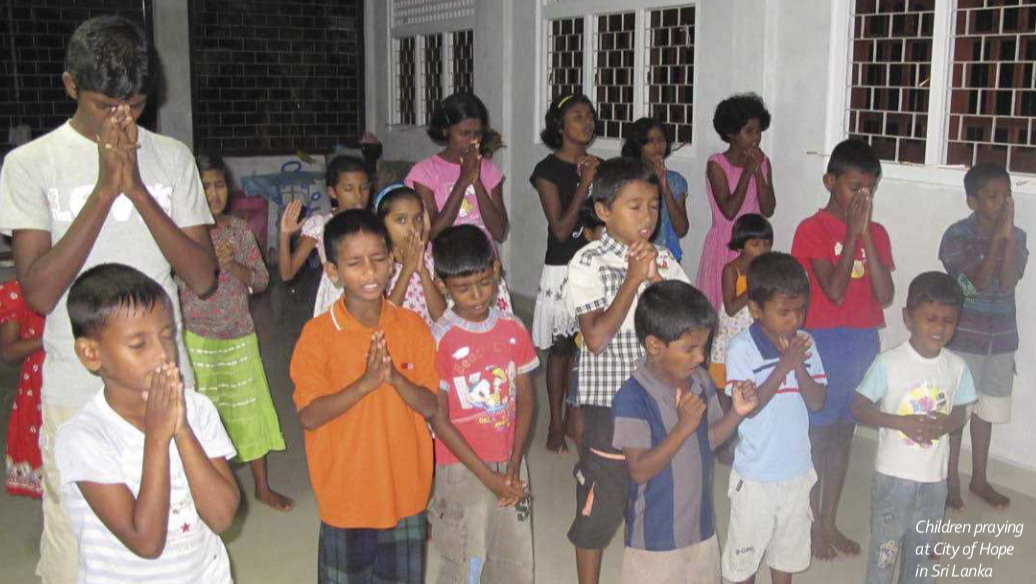 aby Zoe no longer has her parents with her, but love is lavished on the perky 14-month-old by those who care for her at Thailand’s House of Hope orphanage.

The child was the daughter of a teenage couple from the Karen people of Myanmar, who fled as refugees from the armed conflict on the border of Myanmar and Thailand. The penniless and homeless couple dropped Zoe at the Church of God orphanage in Sangkaburi, Thailand. At the time, she did not yet have a name. The orphanage caregivers gave her the name Zoe, which means “life.”

Shortly after her arrival, she was tested for HIV, and the test came back positive. “We know what the doctors have told us,” the women at the orphanage declare, “but we are asking God to restore her to complete health.” Zoe has taken her place among 33 adopted brothers and sisters. She is now wrapped in love and care that give her a life where she will not have to suffer hunger and abandonment.

House of Hope is one of 27 orphanages assisted by Children of the World Ministries Inc. of Bristol, Tennessee. We know of 131 homes for children around the world initiated and carried on by Church of God entities—local churches, districts, territories, national offices, and so on. Seventy-six have received help at one time or another from the international church or from the Lazarus Foundation, a charity founded by Dr. John Gregory and his family.

Children of the World was born in 1998 at the impetus of Gene D. Rice, then World Missions director; the late John D. Nichols, then Care Department director; and John Gregory. It was funded by an offering at the 2000 General Assembly, generously added to by the Lazarus Foundation. More than $5 million was expended by a Finance Committee of Action, primarily for capital expenditures—property, buildings, vehicles, furnishings, and so forth. Fifty-seven percent went to foreign ministries and 43 percent was spent on U.S. children’s ministries.

Following the 2000 children’s emphasis, the movement languished. Needs were taken care of principally by the Lazarus Foundation, as well as by local churches that individually offered monetary help to homes. By 2008, the global economic crisis began taking its toll on children’s care facilities, and the decision was made to ramp up a durable program of assistance. This financial crisis came at a time when more orphans were in need than ever; global estimates range from 143 million to 148 million children living on the street.

The children’s ministry was reinvigorated at the 2010 General Assembly, largely at the behest of Gregory, whose passion for the care of children has been forefront in the family foundation’s priorities. Another offering was targeted for orphans and matched by Gregory, and
a permanent organization was put into place with an office set up in Bristol.

General Overseer Raymond Culpepper convened a meeting of interested parties, at which a 16-member board, comprised primarily of Church of God departmental leaders, was named to govern the activities of the organization, led by John Gregory, chairman; Darrell Rice, chief financial officer; and Richard Baker, chief field officer. The board members provide operational funding, so that all donations to Children of the World go directly to children’s homes. Whether donations are sent to the Bristol office or World Missions, all gifts receive Church of God World Missions giving credit.

The aims of Children of the World include praying and soliciting prayers on behalf of the children and those who care for them; evaluating the ministries in terms of effective and efficient physical and spiritual fulfillment of their mission; providing training and resources for caregivers; conducting visits to encourage directors and staff in their ministries; and sending financial help, based on an analysis of needs and a continuing covenantal relationship.

Children of the World initially undertook the partial sponsorship of 15 homes scattered on five continents. At a subsequent board meeting, additional institutions were adopted. At the present time, 27 orphanages are being assisted, and more will be added in the future as avail- able donations make it possible.

Gene Rice, one of the early leaders of the movement for children, has recruited a group of ministerial couples who visit churches and talk with pastors and laity to raise funds for the children.

Once a home is accepted for assistance, it enters a covenantal relationship with Children of the World, agreeing to use a care manual that spells out requirements relating to physical, fiscal, and spiritual matters. Richard Baker, the chief field officer, typically visits each home and inspects its operation.

One of the sponsored homes is City of Hope in Sri Lanka, where a little boy named Isura, 4 years old, was recently brought for care. This youngster never knew his father, and his mother and grandmother were alcoholics. Neglected, he wandered the streets to forage for food and slept in ditches. Isura was caught at night by men who sexually abused him, beat him, and threatened him with death if he told anyone.

“Now I live with Sister Naomi and Brother Ranga Aiya, and they care for me,” he told Baker on one of his visits. “I have food to eat every day, and I have shoes to wear for the first time. I’m even getting to go to school this year!”

Necessary care that Americans usually consider normal is rare in many lands. Children of the World will continue its ministry and ensure that little boys like Isura and little girls like Zoe will always be loved, protected, and cared for.