When God Sees A Soul

Jesus saw more than ‘a woman caught in adultery’ that day. He saw a soul in desperate need of Grace and Truth. 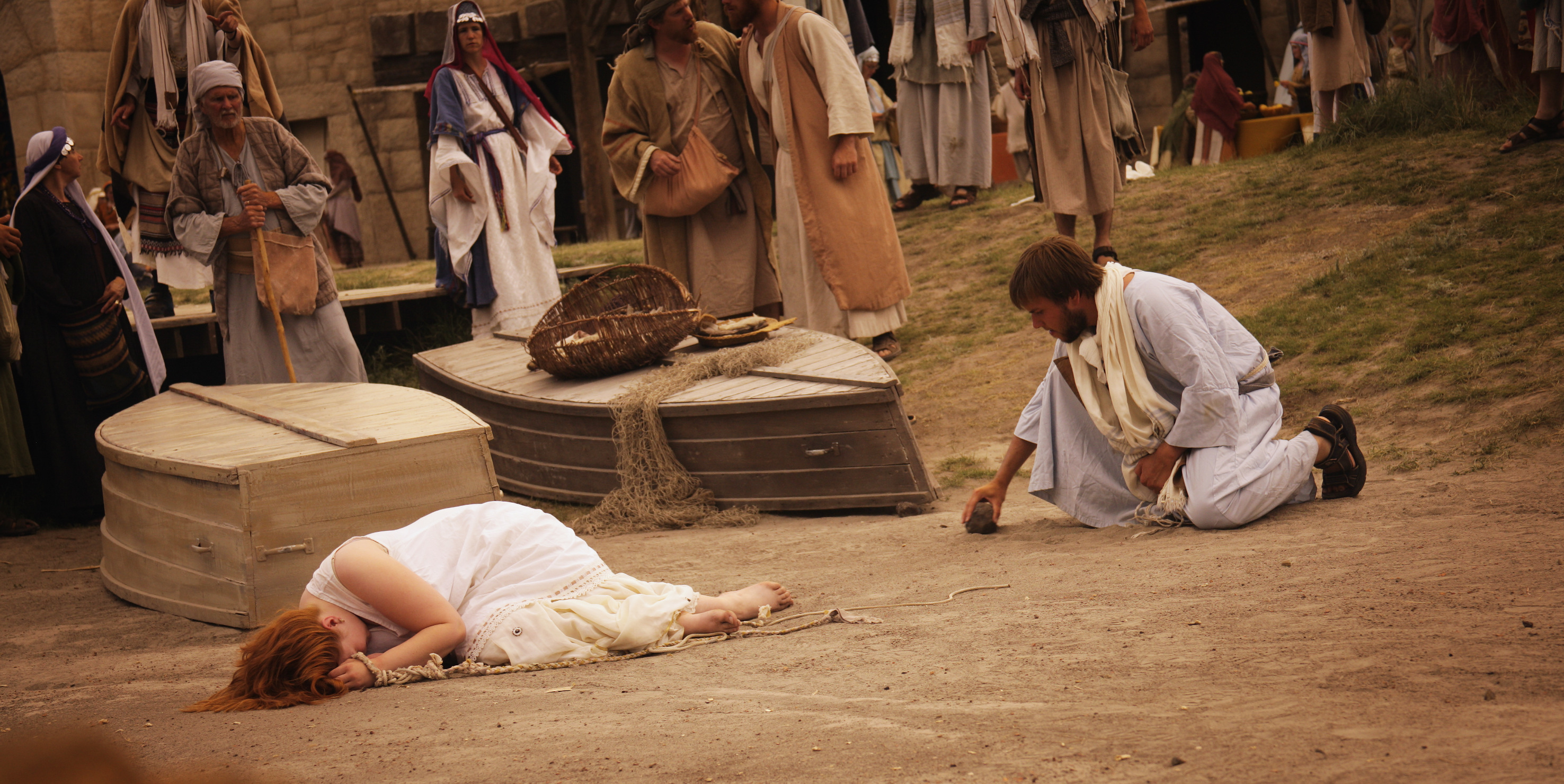 hat was Jesus Christ’s POV? How did He view the places, people, and things around Him? If you could see the world now the way Jesus saw it then, what would it look like, how would the people appear, and what would you look like?

POV is a literary and theatrical abbreviation for “point of view.” It is the angle or spectrum through which someone observes settings, situations, and people. In movies and television, stories are usually seen through the “lens” of one specific character at a time. In novel writing, the story is told through one main character’s POV at a time. POV is critical to viewing and understanding the story.

One thing is certain: Jesus has a POV altogether different from ours. He does not see people the same way that we do—not at all. The Gospel narratives bear this out repeatedly, but no story does so any more than that of the “woman caught in adultery” (John 8:3).*

Jesus went to the Mount of Olives. At dawn he appeared again in the temple courts, where all the people gathered around him, and he sat down to teach them (vv. 1-2).

The conflict in the ministry of Jesus on this particular day occurred in a familiar place (the Temple), amid a familiar environment (a crowd gathered around Him), and while engaged in a familiar practice (Jesus teaching). Jesus was in His element, but the crowd was in for a surprise.

Three main characters show up in this story, and three perspectives emerge—the POVs of Jesus, the Pharisees, and the woman caught in an adulterous act. Each POV brings out some of the dimensions and dynamics of this important narrative. Three things were happening:

1. Jesus was teaching the people.

While in the middle of the crowd, He was doing what He loved and was sent to do—teaching people God’s truth. He was engaging souls with the Word of God.

2. The religious leaders were tossing another sinner into the ring.

The legal experts and Pharisees suddenly burst onto the teaching scene with a harlot in hand. They were determined to turn Jesus’ classroom into a courtroom.

3. One soul found itself precariously caught between judgment and Jesus.

The woman caught in the act was seized by the self-proclaimed “saints” and assumed guilty as charged. She found herself under the glare of the Pharisees and then, suddenly, under the altogether different view of Jesus himself.

The teachers of the law and the Pharisees brought in a woman caught in adultery. They made her stand before the group and said to Jesus, “Teacher, this woman was caught in the act of adultery. In the Law Moses commanded us to stone such women. Now what do you say?” They were using this question as a trap, in order to have a basis for accusing him (vv. 3-6a).

The Pharisees’ view of this woman was connected closely to the condition of their heart. They saw her as they had seen so many others like her.

The Pharisees saw only “a woman.” The phraseology suggests they viewed her as just another woman—of no account, no first name cited, no family name, no personal information. The Pharisees looked at people with a cold, calculated POV.

The Pharisees saw someone “caught” red- handed. This self-righteous “police force” had apprehended yet another person committing a sinful act. They felt justified indicting her, considering it God’s work.

One of the most-pondered mysteries of the Bible was the moment that day when Jesus, in response to pharisaical accusations, bent down and wrote on the ground with His finger. The questions continue to be considered: What did Jesus pen with His index finger into the soil that day? Did He list the Pharisees’ sins, the names of their girlfriends, or did He write something else? After all, just how did these leaders know where to find the woman committing adultery?

But Jesus bent down and started to write on the ground with his fin- ger. When they kept on questioning him, he straightened up and said to them, “If any one of you is without sin, let him be the first to throw a stone at her.” Again he stooped down and wrote on the ground.
At this, those who heard began to go away one at a time, the older ones first, until only Jesus was left, with the woman still standing there.
Jesus straightened up and asked her, “Woman, where are they? Has no one condemned you?”
“No one, sir,” she said.
“Then neither do I condemn you,” Jesus declared. “Go now and leave your life of sin” (vv. 6b-11).

Jesus was aware of dynamics and dimensions of this confrontation that flew past everyone else present. He saw things no one else saw and heard what no one else heard.

Jesus saw a soul accused, but also saw the accusing souls (“If any one of you is without sin . . .”). When the leaders threw this woman into the middle of Jesus’ classroom, He seemed more alarmed by the audacity of their hypocrisies than by the depth of her depravity.

Jesus spoke directly to the soul accused and freed it from sin (“Woman, where are they? Has no one condemned you?”). If the leaders had thrown her at the feet of Jesus the Judge, then He addressed her as had no other judge in history. Instead of, “What do you have to say for yourself?” Jesus inquired something more along the lines of “What can your accusers say about you now?” It appears that He extended mercy without her even asking for it . . . or was it because He had already heard every cry of her humiliated heart? “Neither do I condemn you,” He declared (v. 11).

Jesus challenged that same soul to certain life change (“Go now and leave your life of sin.”). On the heels of great grace extend- ed came an unwavering truth demanded. While one sentence had said “No condemnation,” the next one said, “Clear expectation!”: “Go, and sin no more” (v. 11 KJV). While Jesus loves the soul and cleanses the soul, He also knows how to stretch and challenge the soul to grow.

God does not look at us in the same way we see each other. His view is altogether different. We know this from the Bible. He told Samuel, “God doesn’t look at things like humans do. Humans see only what is visible to the eyes, but the Lord sees into the heart” (1 Sam. 16:7 CEB).

Jesus saw more than “a woman caught in adultery” that day. He saw a soul in desperate need of grace and truth. He saw a soul that needed to be loved, cleansed, and challenged to the core. These actions in the words and ministry of Jesus reveal the importance of the soul in the eyes of God. A closer look reveals His POV from Scripture:

God attaches an inestimable value to a soul. “What good will it be for a man if
he gains the whole world, yet forfeits his soul? Or what can a man give in exchange for his soul?” (Matt. 16:26).

The Word of God is uniquely able to penetrate our very soul. “For the word of God is living and active. Sharper than any two-edged sword, it penetrates even to dividing soul and spirit, joints and marrow; it judges the thoughts and attitudes of the heart” (Heb. 4:12).

Growth in Christ involves an increasing value for and recognition of the souls of people. “From now on we estimate and regard no one from a [purely] human point of view [in terms of natural standards of value]” (2 Cor. 5:16 Amp.).

Some say only three things last forever: the Lord God, the Word of God, and the souls of people. The Word keeps coaxing our POV back to God, His worthiness, and His holiness. And His Word keeps reminding us of the great and underestimated value of one human soul.