With 2,000 worshipers packed together to celebrate Christ’s birth, would a young man with special needs be welcomed? 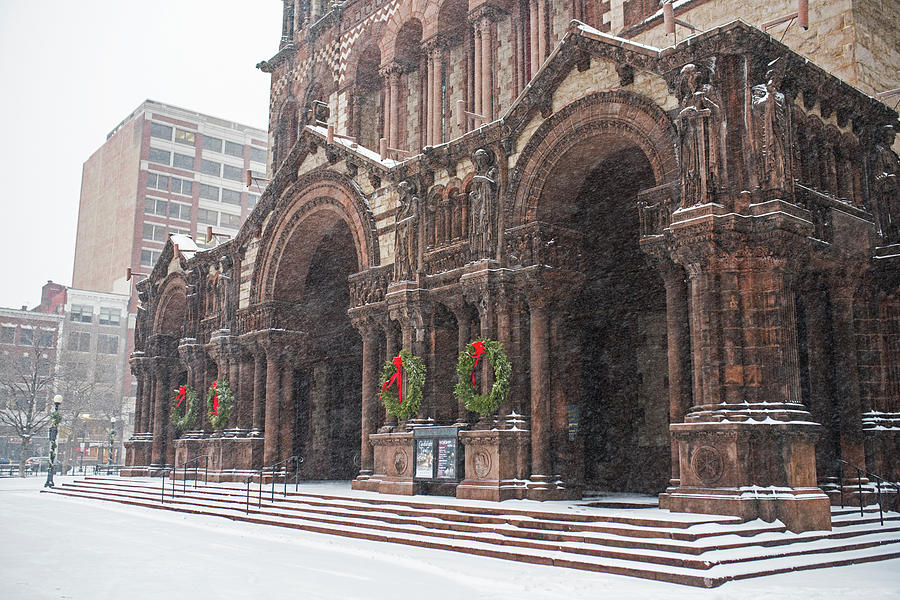 e were seated beneath the mammoth, lofty pulpit in Boston’s historic Trinity Church. Along with some 2,000 worshipers, we had gathered for the annual candlelight carol service.

Handsome faces wreathed in expensive scarves passed through the large heavy curtains that divide the outer quarters from the sanctuary. Women garbed in their seasonal finest gracefully seated themselves in the ancient pews.

“A person has to get here an hour early to get a seat,” I overheard a man whisper to his friend. Even as he spoke, ushers were pointing to side walls where late arrivers could stand throughout the service.

On the expansive platform, poinsettias smothered the regal churchly furnishings. A lone gold cross hung from the front’s very center, as if to crown the ornate display ablaze with color in celebration of Christ’s birth.

Majestic strains pealed forth from the organ: “Trumpet Tune in C Major,” by Henry Purcell; “Sonata for Flute and Organ,” by George Frederick Handel; and others.

One by one, dozens of tall white candles were being lit. They stood as silent soldiers amid the flowering plants.

Our family had invited guests to join us that chilly December evening. Since this worship had become a cherished tradition to us over the years, we relished sharing it with special friends. We awaited anxiously every move, nuance, and musical offering to be placed before God.

Looking to my left, however, I noted a young man who did not seem to fit. He was crouched over at first, bent with his head magnetized toward the floor. Then, with a sharp twist to his right, he slung himself about, rearing his black hair into the air with a jerk. His dark eyes shot at me, then bounced away, then back again in my direction. I noticed some saliva mixing with his beard.

Obviously, the man at the other end of the pew did not notice the youth’s behavior, for he was mesmerized with the lighting of the candles. I wondered what his reaction would be whenever he did glance to his left. There he would witness a crippled man with crutches, a crooked body garbed in denims and flannel shirt.

How had I missed this young man’s entrance within our hallowed corner of the sanctuary? Without notice, he had simply slipped in, wedging his way into our tidy mosaic of season’s liturgy.

Presently I saw an usher—black-suited with a red carnation in his lapel—stoop over the young man, whispering something into his ear.

Oh, no! I gasped inwardly. After all, this was Christmas. And we were in a house of God.

If ever love feasts were to be in fashion, surely this was the time. Surely this usher was not demanding that the poor young man leave for fear of disturbing the sedate!

The usher left him. The young man’s head flipped back again while two hands led two arms into jutted motions scraping the air. One leg shot out and then back against the floor. His eyes darted back to me. Fright was all over his face.

Suddenly I felt sick because of my fear of what was going to happen to this man. Would the ushers, with a veneer of kindness, lead him away from the rest of us? What game would they play to convince him that he would enjoy the service better from a side room somewhere?

People kept milling about, some stretching their necks, hoping they would find some tiny space on a pew for sitting. Few caught sight of the intense drama going on nearby. What could I do? I had no authority in this church. There was no speedy network of rescue that I could call into play and so relieve the anxious, confused black eyes beneath his furrowed brow.

Seemingly out of nowhere, an attractive young lady seated herself beside the youth. I saw her place her hand upon his shoulder, then lean near to his ear, whispering something. Her smile was comforting, understanding, as she turned her head to look straight into his eyes. Presently those distraught limbs began to calm down, and his head settled itself more evenly atop his neck.

The young woman said no more. She just sat there, listening to Vienna’s “Westminster Carillon” from the organ.

The usher who had spoken with the young man then passed right in front of him, going across the aisle to the second pew from the front. That tall churchman had spotted a space 12 inches wide. With diplomatic graciousness, the usher informed the person seated next to that space that he would have a visitor sharing the worship.

Back to the attractive woman and crippled man, the usher made his way. Gently, he lifted the young man under his arm, taking the crutches in his other hand. It was as if the Red Sea parted there for the crossing of this twosome; no one interfered. In no time, the youth discovered himself being presented with the best seat in the house. Smilingly, the person to his right welcomed the lad into the pew.

Again, seemingly out of nowhere, a man in his late 20s, dressed in denims and flannel shirt, his hair tied in a knot at the back of his head, knelt down alongside the handicapped one. I watched him assist the other in shedding his winter jacket, first one arm and then the other drawn out of the sleeves. Next, he carefully placed the crutches on the floor right inside the seat. That done, the kind man joined the attractive lady elsewhere, but within eyeshot of the crippled man.

Then I heard the opening Christmas hymn being sung from a back balcony. The soprano lifted her voice with “Once in royal David’s city stood a lowly cattle shed, where a mother laid her baby in a manger for His bed. . . .”

I could not help but turn around to see the sight. There was the robed soloist surrounded by others dressed in holiday splendor. After all, this was the start of something very special. Worship had begun.

Slowly I turned back to face the sanctuary’s front. But in the turning I glanced again at “my friend.” I saw then the most marvelous sight. Still mixed with the hairs of his black beard was a bit of spittle, but now in his eyes I saw joy.

He, too, had heard the opening words of Christmas praise. He was looking over at the attractive woman and her companion. I did not mean to be prying, but I could not help but glance at them as well. There they were, beaming with kindness rendered, so happy that he was all right, that he had been given a good place to sit, so ready for the worship of the King. On the second verse, the congregation was to join the soloist. With a shining face, the youth twisted his mouth in jubilation. The furrow was gone from his forehead, thank God. With the rest of us he was singing out, “With the poor, and mean, and lowly, lived on earth our Savior holy.”

Although it was still days before the 25th, I knew in my heart that for me, at least, Christmas had begun.