Where is their hope? After saving lives in the community, who will save them?

he Thin Blue Line” is a well-known expression and symbol to anyone serving in law enforcement. A thin blue line separated by two black bands means a relatively small number of police officers is what protects civilized society from falling into chaos.

This blue line is made up of husbands, wives, fathers, mothers, sons, daughters, brothers, sisters, and neighbors. They represent ordinary men and women who, at some point, felt the extraordinary calling to risk their lives every day to serve others.

But what happens when someone takes a job with low pay, high stress, odd hours, heightened media scrutiny, and a very real chance of death? The financial burdens, marital issues, stress disorders, health problems, and spiritual disillusion that plague police officers are stretching this already thin blue line even thinner.

Where is their hope? After saving lives in the community, who will save them?

CLE’s mission is twofold: (1) promote faith and solidarity among Christian law enforcement personnel; (2) encourage those officers to testify about salvation in Christ.

Jonathan describes CLE as “an evangelistic ministry that seeks to minister in a holistic fashion to the core needs of officers and families within the profession.” 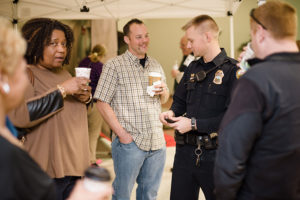 “Covered Law Enforcement does not establish chapters with formal membership, but rather seeks to serve as a resource and unifying agent for all Christians within the profession regardless of denominational or law enforcement affiliation,” according to the website. “This is accomplished through the distribution of Bibles, teaching, training, and creating resources that will be used to bring spiritual renewal for a new generation of blue.”

The idea for the ministry was revealed to Jonathan “during a process of discerning the will of God.”

After completing an undergraduate degree in criminal justice, Jonathan pursued a degree from the Pentecostal Theological Seminary School in Cleveland, Tennessee, where he met his wife, Meredith. Together, they had a vision to plant a church.

However, in need of employment, Jonathan applied with the Chattanooga Police Department and was hired as a full-time officer in 2007.

“I was trying to figure out what the Lord had for us. We thought He had called us to plant a church, but here I am working in law enforcement. I said, ‘Lord, this isn’t what You called me to do!’ Or, so I thought,” said Jonathan.

He described the moment he received divine direction.

“I was preaching in New York at a youth church retreat and, in the middle of the sermon, the Lord spoke to me, ‘If you didn’t resent where I had you, I might be able to use you.’ And so then, my heart began to change to ministering to law enforcement, and about 2010, I founded Covered Law Enforcement.”

Four years later, Jonathan told his wife about the idea for Cop Church.

“I told Meredith, ‘If we can’t pastor like we thought we would, we’ll start a church for law enforcement families and see what happens.”

Shortly after, Jonathan met a pastor at a local recreation area and shared his idea, telling him about his “burden for ministry and a crazy idea.”

“And then the doors began to open,” said Meredith.

The pastor they met at the rec area offered his church’s children’s facility for them to use. On opening night in February 2014, more than 130 people attended the service and packed the small space beyond its intended capacity. It proved to be both a blessing and an obstacle for the Parkers as they realized a larger space was necessary.

Soon, Jonathan and Meredith met Pastor Steve and Reita Ball, who pastor the Metropolitan Tabernacle Church in Chattanooga. After learning about Cop Church, Pastor Ball offered to let the Parkers use their facility.

“It has been a great partnership with Tabernacle. Once we knew we had a place, I used my experience in seminary and church-planting training to plant Cop Church,” said Jonathan.

Meredith said, “We have several families who said they were previously unchurched and are now coming. We also have families where perhaps only the mother and children came without the husband because he didn’t feel comfortable in church. But now he does feel comfortable because this is for law enforcement families.”

Jonathan added, “Police officers are going into all parts of the community and seeing people on their worst day. They see so much ugliness. They wonder, Where is God in all of this?”

That is the need Jonathan and Meredith said they want to fulfill, not only for the Chattanooga area but across the country. So far, this has been accomplished through the Cop Church website, where Jonathan’s sermons can be viewed online or downloaded as an audio file.

“People have written comments on our website [CopChurch.com] about how much they enjoy Cop Church,” Jonathan said. “One person from Northern California said they have been streaming our services, and we have been like water in a desert to them.”

Jonathan explains Cop Church is not intended to exclude the larger community, but “everyone is welcome.”

“Like a Hispanic or Romanian church where language and culture bring people together, law enforcement is what brings us together. We just know who He has called us to target.”

Cop Church also offers a different time of worship than typical churches. They meet on the first and third Tuesday nights of the month.

“There are a couple of reasons for that,” Jonathan explained. “If an officer can’t go to church on Sunday because of his schedule, then having it on a different day allows him to come.

Also, some officers already have a home church, but they feel a disconnect with regards to the particular needs of law enforcement. We don’t want to pull anyone away from their home church, but this can be another ministry for them. So, we are reaching those not connected to church and those who are,” said Jonathan.

Cop Church also gives back to the community.

“We supplied backpacks for kids for the new school year through Backpack Chattanooga. We’ve paid bills for harmed officers out of work. We’ve given back to Metro Tabernacle, and we’ve helped families in crisis. This culture is hard to reach because of walls, and it’s easier to reach people when you have a relationship with them,” said Jonathan.

“Instead of a divide, let’s bridge the gap. By doing outreach ministries, it shows we are regular people, not big, bad wolves. We’re getting to know the community on a personal level.”

Yet, Pastor Parker said he understands that overcoming someone’s distrust of police officers is a sensitive issue.

“You must address the fear and validate that concern first before you work on education and facts. Trying to convince someone they’re wrong will not work. It doesn’t have to be an ‘us versus them’ situation. As followers of Christ, that is our first identity. If we are living out the Word of God and fulfilling the kingdom of God, then these issues go away. Let’s pray with people. We’re all human beings and children of God,” said Jonathan.

The Parkers said they want to see other churches like Cop Church spring up.

“Since our launch, we’ve been getting calls from all over the country─ministers and laypeople asking, ‘Can you help us start something like this?’ So far, Bible studies and possibly another church geared toward the law enforcement community have been started in Cincinnati and Philadelphia,” said Jonathan.

Jonathan and Meredith encourage anyone who wants to get involved with this type of ministry to contact them.

“We can give you ideas and provide resources. We’ve already helped some churches organize a Law Enforcement Appreciation Sunday. And we’re letting folks know that the week of May 15 is National Law Enforcement Week. Anybody can get engaged.”

Arleah DiFebbo is subscription manager for the Church of God Evangel.